In 1978, the Australian government decided to purchase two passenger jets for strategic transport, Qantas agreed to sell the government two Boeing 707-338s for $14.5 million, the first was transferred to the RAAF in March 1979. 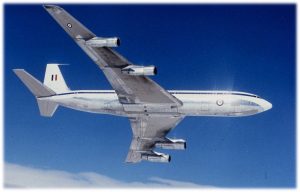 During No. 37 Squadron’s years of operating B707 aircraft they were primarily utilised for Butterworth personnel and families changeover operating between Sydney (Mascot) and Penang (Paya Lebar) airports, personnel and equipment deployments / redeployments within Australia and overseas plus VIP travel for  the Federal Government Prime Minister, Ministerial Staff and members of the  press contingent.

Some notable tasks undertaken by the 37Sqn B707s include:

No. 37 Squadron continued to operate these two airframes until 2nd February 1981. On that date No. 33 Flight, under the command of WGCDR Dave Grierson, was formed, then ultimately No. 33 Squadron, RAAF Base Richmond in July 1983.