In 1964 the Australian Government identified the RAAF had insufficient long-range transport aircraft to simultaneously support overseas deployments in Asia and Vietnam plus meet military domestic requirements in Australia. A decision to purchase 12 x Lockheed C-130E Hercules transport aircraft was announced in November 1964.

No. 37 Squadron re-activated at RAAF Base Richmond NSW on the 21st February 1966.

At this time Flight Authorisations and aircraft tail numbers were not recorded in the Unit History Sheets.

The squadron’s first task to Butterworth (BU) created an historical event in Indonesian / Australian relations when this 37SQN task became the first military flight to receive clearance to transit Indonesian airspace during daylight hours since the cessation of Confrontasi.

Between 1962 and 1966 Indonesia and Malaysia fought a small, undeclared war which came to involve troops from Australia, New Zealand, and Britain.  Continuing negotiations between Indonesia and Malaysia ended the conflict, and the two sides signed a peace treaty in Bangkok in August 1966. Twenty-three Australians were killed during Confrontation, seven of them on operations, and eight were wounded. Because of the sensitivity of the cross-border operations, which remained secret at the time, Confrontation received very little coverage in the Australian press.

That Lockheed association continues through until this present day in 2018, with the squadron operating 12 x Lockheed Martin C-130J-30 Hercules. 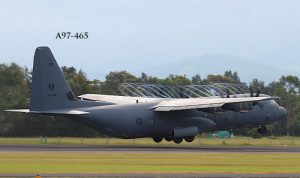